Five reasons U.S. aid to Israel is a bad investment

Israel and its U.S. lobby are pressing President Barack Obama to sign an executive agreement pledging $45-$50 billion in military and other support to Israel over a ten-year period. The secret negotiations have hit so many administration roadblocks that Israeli Prime Minister Benjamin Netanyahu is making a special visit to the U.S.—on the pretext of receiving an award from a neocon think tank—but in reality angling for a meeting with Obama. Israel wants a greater percentage of U.S. taxpayer aid dollars to be spent in Israel, rather than flowing into U.S. military contractors. Israel’s side also opposes Memorandum of Understanding (MOU) caps on its flexibility to continually lobby Congress for additional aid for “joint” projects, such as anti-rocket defense systems, which mostly go to Israeli contractors.

It is surreal that Israel is even asking Obama to sign on the dotted line rather than waiting for the next president to promise aid. The Israeli government pulled out all the stops opposing the administration’s signature foreign policy achievement—the JCPOA—going as far as offering bribes to Congress and conducting espionage on U.S.-led negotiating sessions. However, Netanyahu has calculated he stands a better chance at extracting a new deal from Obama than whoever next occupies the Oval office.

The majority of Americans, on the other hand, overwhelmingly oppose U.S. aid to Israel , according to polls fielded in 2014 and 2016. Growing numbers would rather boycott, divest and sanction Israel for its human rights abuses than provide the arms and blanket diplomatic support (commonly stipulated in these MOUs) that enable the abuses to continue. Beyond that, there are five lessor known reasons Americans should be actively opposing U.S. aid to Israel:

From a strictly green-eyeshade perspective, U.S. aid to Israel is a horrible investment. The late Harvard economist Thomas Stauffer in 2002 tallied the cost of Israel to the United States since 1973 to be $1.6 trillion. Stauffer included the oil crisis triggered by Arab governments in the aftermath of wars fought with Israel and other costs emanating from Israel’s violent repression of the Palestinians. Since Stauffer’s death in 2005, no other high-profile economist has taken up the thankless task of calculating such figures, though fresh data to feed such models has been piling up.

It is now the consensus view that America was attacked on 9/11 because of U.S. troops stationed in Saudi Arabia and unconditional U.S. support for Israel. The 9/11 attacks cost $3.3 trillion according to one conservative estimate. Israel lobbyists often claim that U.S. foreign aid to Israel is an investment that yields “dividends” and is therefore a “bargain.” If we assume aid is an investment and adjust for inflation, publicly known aid through 2011 is $233.6 billion. If we then assign unconditional U.S. support for Israel half the blame for motivating 9/11, an actual return on investment calculation is possible. The ROI of U.S. aid to Israel considering only half the costs of 9/11 is negative 806 percent. By any measure, this is an extremely poor return.

Many pundits are now spinning the proposed new MOU as a “U.S. jobs creator,” particularly in view of the pending restrictions against spending much of the aid in Israel. But how many jobs do military sales actually generate? Pitifully few. The top five military contractors, Lockheed Martin, Boeing, Raytheon, General Dynamics and Northrup Grumman claim to employ nearly a half-million, on annual 2015 revenues of just under a quarter trillion dollars. At $463,069 to support a single direct job, military equipment and service vendors employ many fewer employees per dollar of revenue than most other industries. Looking back, even if Israel spent 100 percent of its past ten-year $3.1 billion annual MOU dollars on “top shelf” U.S. military goods, like the Joint Strike fighter, it would have produced less than 7,000 direct U.S. jobs. 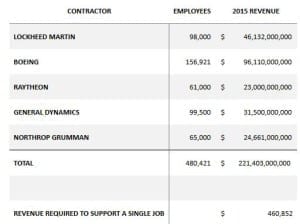 However, Israel’s largest U.S. “purchases” by volume are not high-tech goods, but rather the jet and diesel fuel it needs to reach its ever-growing number of designated enemies both in territories it illegally occupies and neighboring countries. In April, 2016 Israel notified Congress of its need for 864 million gallons of aviation and diesel fuel on average priced at $3.09 per gallon. Such commonplace commodity purchases drag the number of jobs supported in the U.S. by the MOU down to embarrassingly low levels.

Redirecting such tax dollars to projects inside the U.S., in particular for rebuilding desperately-needed infrastructure, would employ many more Americans per dollar spent than military contractors while providing tangible benefits to the commonweal. The U.S. construction industry supports a job for every $174,000 in output. The proposed $5 billion in aid proposed for Israel could instead unleash the restoration power of nearly thirty-thousand American construction workers—rather than a future of bloody Israeli military onslaughts on Gaza or Lebanon or yet-to-be determined targets.

Back in 1960, the U.S. Central Intelligence Agency predicted what has since come to pass. If Israel were able to achieve military hegemony in the region, it would lose interest in pursuing peace with the Palestinians and its neighbors through meaningful and justified concessions. The very aid that most Americans now oppose makes resolving the oldest, most disruptive conflict in the region impossible. In turn, U.S. support generates periodic blowback against the U.S., in the form of oil embargoes, terror attacks and loss of goodwill across the globe.

The CIA’s special national intelligence estimate based its prediction of Israeli regional military hegemony on its acquisition of nuclear weapons. Since the beginning, Israel has relied on being able to surreptitiously source materials, know-how and technology from the U.S. and evade punishment when its agents were caught in the act. Charities raising hundreds of millions in the United States, such as the American Committee for the Weismann Institute for Science count on the IRS and the rest of the U.S. Treasury to look the other way and pretend clandestine nuclear weapons development has some sort of social welfare function. American taxpayer dollars devoted to providing Israel with military goods including nuclear capable aircraft and commodities therefore offset, subsidize and empower Israel’s clandestine development of nuclear weapons. This situation—well known and endlessly explored in foreign news media—makes the United States the butt of jokes at Nuclear Nonproliferation Treaty (NPT) conferences.

In the mid-1970s, during investigations into the illegal diversion of weapons-grade uranium from U.S. contractor NUMEC to Israel, Senators Stuart Symington (D-MO) and John Glenn (D-OH) amended the 1961 Foreign Assistance Act to ban any U.S. aid to clandestine nuclear powers that were not NPT signatories. The legislative intent of the amendment, as expressed by Symington, was clear: “if you wish to take the dangerous and costly steps necessary to achieve a nuclear weapons option, you cannot expect the United States to help underwrite that effort indirectly or directly.”

Since the law went into effect foreign aid including estimated assumed intelligence support—which the CIA refuses to divulge under the Freedom of Information Act—has reached an inflation-adjusted $234 billion in taxpayer outlays. Eager to secure the political support and related campaign contributions from America’s soon-to-be $6 billion per year Israel lobby ecosystem, administrations flout the law by pretending not to know whether Israel has nuclear weapons, despite ample information in the public and government domain. The American public is not fooled. When polled in 2014, 63.9 percent claimed they believed Israel had nuclear weapons. Therefore, the continuance of illegal aid is a moral hazard that chips away at America’s already low confidence in rule of law and “justice for all.”

At this critical juncture, America’s only hope is that the courts issue an injunction against future illegal aid —and order an overdue claw back of the $234 billion unlawfully distributed in the past—to be spent on legitimate purposes in the future. This judicial act would remedy a boondoggle so vast, entrenched and long-running it makes even scandals such as Teapot Dome seem like tempests in teacups.

Grant F. Smith is the author of the new book, Big Israel: How Israel moves America. On August 8, 2016 he filed a lawsuit in federal court to block U.S. foreign aid to Israel and claw back aid illegally delivered since 1976.