The March 24 all-day conference “The Israel Lobby and American Policy” at the National Press Club will feature the following speakers: 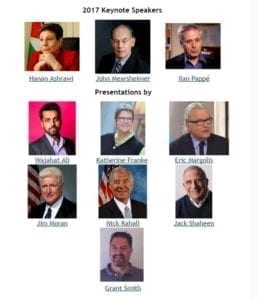 Wajahat Ali is a journalist, writer, lawyer, award-winning playwright, TV host, and consultant. Ali will discuss the intersection of pro-Israel organizations and donors and Islamophobia he uncovered as the lead author and researcher of the report “Fear, Inc: The Roots of the Islamophobia Network in America.”

Hanan Ashrawi is a long-time Palestinian legislator, analyst and political leader. She will discuss the Israel lobby and the “peace process” from a Palestinian perspective.

Katherine Franke is the Sulzbacher Professor of Law at Columbia Law School, and is on the Executive Committee of Columbia’s Center for Palestine Studies. She also sits on the steering committee of the Academic Advisory Council of Jewish Voice for Peace, and chairs the Board of Directors of the Center for Constitutional Rights, based in New York City. Franke will review recent legislation that threatens the First Amendment rights of Palestinian solidarity activists in the U.S. and the legal challenges thereto.

Eric Margolis is an award-winning, internationally syndicated columnist and will present a discussion titled “Looking forward, why does Israel need U.S. aid?”

John Mearsheimer is the R. Wendell Harrison Distinguished Service Professor of Political Science and the co-director of the Program on International Security Policy at the University of Chicago. He will review what has changed in the decade since the book The Israel Lobby and U.S. Foreign Policy was published and what the new administration could do differently in the future that would better serve broader American interests.

Jim Moran is a former U.S. Representative for Virginia’s 8th congressional district in Northern Virginia, including the cities of Falls Church and Alexandria, all of Arlington County, and a portion of Fairfax County. Moran will discuss “What it takes to beat the lobby” in Congress.

Ilan Pappé is Professor of History and Director of the European Centre for Palestine Studies at the University of Exeter in the UK. He will discuss the utility of viewing Israel-Palestine through the lens of settler-colonialism.

Nick Rahall is a grandson of Lebanese immigrants and represented West Virginia in the U.S. Congress from 1977 to 2015. Rahall will advise on “How to support the members of Congress who are beginning to listen to all their constituents” on Middle East policy issues.

Jack Shaheen is an acclaimed author and media critic. He will discuss strategies he used to successfully push back against harmful Hollywood stereotypes about Arabs and Muslims and the work new generations must now take on.

Grant Smith is the director of the Washington, DC-based Institute for Research: Middle Eastern Policy (IRmep) and the author of six books about the Israel lobby. He will discuss a series of stunning—but underreported—polls revealing true American attitudes about U.S. aid to Israel and other top AIPAC programs.