Last Year Lockheed got 32.5 Billion dollars from the US tax payers. Let that sink in. This is nearly as much as what the government allocates to the State Department. It is well more than what many other federal agencies get. Lockheed is the new East India Tea company. It is so big it might as well be a state. This corporation also benefits from the foreign aid to states like Israel which is where it jointly built its most expensive project to date the F-35 which has costs more than 1.5 Trillion dollars to produce. The fighter jet doesn’t even work as well as previous jets. There are a long list of problems with it. F-35b Fuel Tank redesign, problems with : Software delays, lightening protection, flight control problems, helmet display issues, avionics processors, thermal management systems, ejection seat assemblies, cockpit display electronics unit, seat survival kits, igniter-spark in the turbine engines, and even the on-board oxygen generating systems. (The 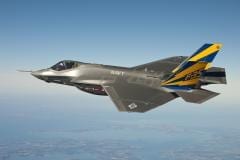 oxygen problems  the pentagon reports as “pilot physiological events,”) There are problems with the tires, landing gear, in fact it the tailhook is not even compatible with US carriers. The Automatic Logistics Information System or ALIS doesn’t work. The F-35 has also been grounded for electrical problems.   You could not find a more creative way to waste $1,500,000,000,000 and counting. This doesn’t even include the cost per unit, or maintenance, that’s just the production cost. Oh and the stealth doesn’t work… on a stealth fighter jet. The stealth coating has even been found peeling off and the repair crews have been hospitalized from dealing with it. They were not allowed to tell the medics what it was made out of because of the secrecy. One thing it can do is something it is not supposed to do and that is spy on our allies. Are these problems just hiccups from the past that have been straightened out? No, in Jan of 2018 the pentagon reported that half of the F-35 fleet was grounded for tech problems!


Lockheed Martin, if you remember is who gave the seed money to the Weekly Standard which was the Neocon rag which pushed the lies about Iraq the most ferociously in order to offer a pretext for the 2003 invasion. William Kristol and Robert Kagan get the credit/blame for founding PNAC’s mouthpiece. However the funding for this Hasbara center piece  of Zionist war propaganda was Lockheed Martin.   Richard Cummings wrote in Lockheed Stock and two Smoking Barrels  How Bruce Jackson the VP of strategy and Planing for Lockheed, gave Bill Kristol the money. It should not surprise anyone that Bruce Jackson would finance PNAC’s media arm, when Jackson was the Executive Director for PNAC. Bruce is currently the President of the Project on Transitional Democracies. PTD has been meddling in Ukraine, and imagine my lack of shock at who comes to defend them. The best reporting on the Ukraine debacle was probably from Robert Perry of Consortium News, unfortunately he passed away this year.  Jackson, even though he admitted that he didn’t know anything about Iraq was selected to be chairmen for the Committee for the Liberation of Iraq. Since he didn’t know anything and was just taking a salary he deferred the actual decisions over to Randy Scheunemann.  Scheunemann was on the board of directors of PNAC and the treasurer of PTD. See a pattern there? Dick Cheney’s wife was on the Board of Lockheed. They signed up advisors to the board for the Committee for the Liberation of Iraq, such as Richard Perle and James Woolsey. Perle has too many lies to list and Woolsey was the Weekly Standard’s source for the lies about Anthrax which  wrongly attributed a connection between 9/11 hijackers and Iraq. There was more news about the non existent meeting in Prague between Al Qaeda and Iraq than the actual Al Qaeda summit in  Malaysia where the CIA observed future hijackers meeting with KSM. They then openly moved to and lived in the US without the CIA informing the FBI. More on that

Is the public up in arms about Lockheed literally being up in arms? Not really because the news rarely if ever breaks the print media barrier. Televised news is simply too tied up with industry to rattle the cages. It is very hard for them to have a story approved about the MIC or Big Pharma the two pillars of corporate news sponsorship. That is why I hope you will consider supporting this site and other non corporate news sites.