Jared Kushner son of the felon Charles Kushner, may be guilty of breaching the Logan Act as he instructed incoming Gen. Michael Flynn to call Russia contacts to manipulate their vote in the UN concerning Israeli settlements. Of course that is not the half of it. The Kushners have helped finance the internationally illegal [racial colonies] settlements.

“Jared Kushner failed to disclose his role as a co-director of the Charles and Seryl Kushner Foundation from 2006 to 2015, a time when the group funded an Israeli settlement considered to be illegal under international law, on financial records he filed with the Office of Government Ethics earlier this year.

The latest development follows reports on Friday indicating the White House senior adviser attempted to sway a United Nations Security Council vote against an anti-settlement resolution passed just before Donald Trump took office, which condemned the structure of West Bank settlements. The failure to disclose his role in the foundation—at a time when he was being tasked with serving as the president’s Middle East peace envoy—follows a pattern of egregious omissions that would bar any other official from continuing to serve in the West Wing, experts and officials told Newsweek.” –NW 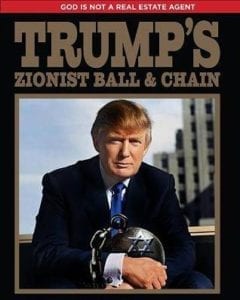 It should not be shocking, that the Kushner family, ardent Jewish Zionists who have had the Prime Minister of Israel Benjerman Netanyahu sleep in their house, would favor financing illegal Israeli settlements. The Trump administration’s clear anti-Iran stance which has gone even as ridiculously far as to blame Iran for 911, has been influenced by the Kushners. Donald Trump’s own son revealed that the motivation behind the cruise missile strike against Syria came from Ivanka Trump, Jared Kushner’s wife getting in her dad’s ear.

The media has been trying its best to avoid mentioning Israel in the Flynn case at all. “Reports on the websites of NPR, CNN and CBS about Flynn’s plea seen by The Electronic Intifada on Friday morning initially made no mention of Israel at all. CBS and CNN later added information about Flynn’s role in trying to thwart the UN resolution vote. NBC and The New York Times mentioned Israel in their reports, respectively in the tenth and eighth paragraphs.”-Source

Will this get back to Netanyau? Undoubtedly he would have contacted Jared Kushner his buddy with security clearance whose bed he has slept in. Will the probe even ensnare Jared Kushner? Israeli crimes seem to always get a pass.However the Times has reported,

The real motivation to go after Flynn seems to be his stance on Syria. Flynn’s position on Syria is at odds with Israel’s as well as the Obama administration. The other account in his guilty plea in regards to making calls to Russia is over a call he made negotiating a deescalation in Syria.  This has boomeranged as Flynn was also told to call on behalf of the Apartheid State.  As Robert Perry put it best in Consortium News

“Though the original point of the inquiry was whether the Trump team colluded with Russians to use “hacked” emails to defeat Hillary Clinton’s campaign, the criminal charge against Flynn has nothing to do with election “collusion” but rather President-elect Trump’s aides weighing in on foreign policy controversies during the transition. And, the first initiative was undertaken at the request of Israeli Prime Minister Netanyahu, not Russian President Vladimir Putin.”


Max Blumenthal summed up what stupid decisions Flynn should actually be held accountable for vs the decisions that actually brought on the which hunt.  The NSA already knew what kind of calls Flynn had made to Kislyak in regards to Russia and they laid out a perjury trap for him.  Flynn opposed the Obama administration’s plan to Arm the Syrian Kurds.  This may or may not have been out of any clear outlook on the conflict which saw the blowback that would come from arming Kurds who no doubt wanted to annex territory in Syria as they had done in Iraq. It was more likely because Flynn had been paid off by Turkey to the tune of more than half a million dollars.  Dong the right thing for the wrong reasons was still a no no since he was going against the Obama administration’s plan for Syria. Even though he took the payments that doesn’t mean it wasn’t also inline with his sincere thoughts on the matter anyway. Flynn even expressed doubt about the 2013 gas attack in Syria saying, that who knows if it was a False Flag.

“During a 2015 trip to Russia, Donald Trump’s pick to be national security adviser, Lt. Gen. Michael Flynn, said he didn’t know whether the 2013 sarin gas attack in Syria was conducted by the Syrian Army or by other forces in an attempt to draw the United States into the conflict.”

Max Blumenthal breaks down Flynn’s stupid decisions and why he is actually the target in the witch hunt.

Gen. Flynn had gone as far as saying ISIS was created by the Obama administration to overthrow Syria.

The White House made a conscious decision, he said, when it sponsored the radical jihadists who later became the Jabhad al-Nusra and the Islamic State of Iraq and Syria, or ISIS, to fight the Assad regime.-WND

It is pretty clear why Flynn was really targeted, however how will the Media justify its condemnation over calling Russia asking them not to react so harshly to an outgoing Obama administrations’ sanctions vs calling on behalf of the interests of a foreign government apparently at the behest of the Israel Prime Minister’s demands? Israel has hijacked US foreign policy not Russia. Netanyahu holds the presidents ear not Putin.
-Ryan Dawson