It is difficult for normal people to fathom the mind set of psychopaths. It is hard for sane people to understand the fanaticism of the god is a real estate agent crowd. And for some reason so long as a group can maintain victimhood status, they can deflect and excuse their current abhorrent behavior. The individuals who would make up the first Israeli government and institutions were the same people who formed terrorist organization where by any means necessary they would get Jews to move to Palestine even if it meant working with Nazis even if it meant murdering children. The Haganah, Irgun and Stern gangs were involved in terrorism well before the creation of Israel in 1948. The list of atrocities would take considerable time to compile. But one incident sticks out which really displays their ardent attitude for an ethnic state and that is the SS Patria. Rather than allowing illegal Jewish refugees to leave Palestine, they bombed the ship the day it was leaving  and murdered hundreds of people.

77 yrs ago to the day Nov 25th 1940, Jewish terrorists organized by the Jewish Agency which would later become the Israeli government, sank the SS Patria. The ship had over 1,800 Jewish refugees. The bombing killed 282-267 people  and injured 172 (including 50 British crew). The paramilitary group Haganah (which later became the IDF) and Irgun terrorists bombed the Patria which was carrying Jewish refugees. These people had survived Hitler’s Europe, only to die at the hands of evil Zionists. Until it was revealed who had done the bombing, the story was put out first blaming the British and later the story became that the refugees saddened to leave had bombed it themselves. Yes the Jewish terrorists blamed the victims.


The Haganah’s role was finally publicly disclosed in 1957 when Munya Mardor, the operative who had planted the bomb, wrote an account of his activities in the Jewish underground. He recounted, “There was never any intent to cause the ship to sink. The British would have used this against the Jewish population and show it as an act of sabotage against the war effort” Never mind murdering so many people, it would be bad PR. Some leaders of the Yishuv (the Jewish community in Palestine) argued that the loss of life had not been in vain, as Patria’s survivors had been allowed to stay in the country. Think about that, it was OK to kill a bunch of people so long as it made other people remain in the country. Note that none of these people were from Palestine in the first place, they had come there from Europe. British authorities were deporting from Mandatory Palestine to Mauritius because they lacked entry permits. 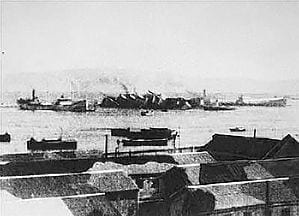 The Haganah claims to have miscalculated the effects of the explosion. The bomb blew a 6 meter hole in the ship which turned on its side and sank in less than 16 minutes. Hundreds were trapped in the hold and drowned. It was so important to the Zionists to create a majority Jewish demographic in Palestine, that they were willing to attack Jewish refugees on the day they were set to leave Haifa. It was worth that risk. Ironically it was Palestinian Arab ships along with British who rescued the survivors. Irgun first tried unsuccessfully to plant a bomb, then Haganah planted a bomb on Nov 22 they claim, but it did not detonate, so on November 24 they smuggled in a second larger bomb and detonated it on the 25, when the ship was full of passengers. Munya Mardor smuggled both bombs in the same way. He used a leather sack commonly being used by workers to carry lunches to conceal the bombs. His cohort who would light the fuse was named Hans Vanfel. Vanfel died in the attack. As you can imagine most of those who drowned were those trapped in the hull as the ship turned on its side and sank, followed of course by the children who no doubt would have been the least able to resist the drag of the ship sinking and or swim to shore even if they could. Their little lungs filled up with water and they died. they would never know or understand why they were being killed or that their deaths were the result of the zeal that fanatics thought was important to import the right blood line in order for the self proclaimed race of god to inhabit the dirt they read about in religious schools.  They died a horrible death. Munya Mardor went on to become the director general of the Israel Weapons Research and Development Authority, this was even after admitting he played a central role in an act of terrorism. For Zionists, the ends justify the means.

The Haganah officer in charge of the operation was Yitzhak Sadeh (a Polish Jew who would be a founder of the IDF), authorized by Moshe Sharett (who would become the second Prime Minister of Israel), who led the Political Department of the Jewish Agency in the temporary absence of David Ben-Gurion (who would become the first prime minister of Israel), who had left for the United States on 22 September and did not return until 13 February 1941. The Jewish agency is the same group responsible for the Haavara agreement which cut a deal with the Nazis to deport Jews to Palestine. The JA is also who sent Paul Kurzberg to the US as one of the spies who was celebrating and had foreknowledge of 911. It appears they never left their terrorist roots. The Israel government is literally an outgrowth of terrorist organizations and Nazi collaborators.

It wasn’t the first or last time that Jewish terrorist killed British sailors, civilians, or blamed the acts on others. It wasn’t the last time Jewish terrorists attacked ships either.  When the Pan Crescent, a ship that was part of a duo with the Pan York carrying 15,000 illegal immigrants, stopped in Venice for outfitting there was an underwater explosion. Haganah immediately blamed it on Arab terrorists.


On July 18, 1946 the SS Exodus, which was carrying illegal Jewish immigrants was intercepted by the British HMS Ajax and returned to Haifa and then deported to Europe. In 1951 it was revealed to David Balfour by the first director of the Mossad, Reuven Shilioah a report signed by Menachem Begin plans for the Palyam to sabotage HMS Ajax. It was to show that British intelligence was neither omniscient or infallible. However perhaps they underestimated British caution, as the ship was moved from its berth in Haifa to Malta. Menachem Begin who in 1946 was the leader of the Stern Gang famous for shooting up Palestinian villages, which blew up the British embassy in Rome, became Israel’s 6th prime minister. He is also the founder of the Likud Party. You see, with Ben Gurion, Moshe Sharett, and Menachem Begin, all having terrorist roots and all being Israeli Prime Ministers, that Israel’s terrorist beginnings were not just a few bad apples. With the IDF flowing neatly from Haganah’s Palmach and Brichah units with all the same officers in charge, Israel did not simply start with terrorism and then switch over to form a state for holocaust victims. Israel’s founders are all terrorists at the core and their activities never changed, only they became state ordained.  Albert Einstein, who was offered the role of being the first Prime Minister of Israel I guess for credibility, steadfastly refused it, spoke out against the “Jewish” state. Having a Jewish state was as silly as having a Jewish bus or a Jewish chair.  Whatever early Zionist movement seeking a safe homeland for Jewish refugees that had begun had quickly been taken over by religious fanatics and psychopaths. Einstein and other prominent Jews all signed a letter to the paper of record, that called Menachen Begin a terrorist. 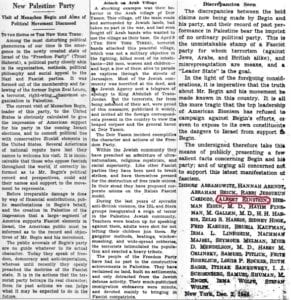 Eight days after Ajax had intercepted the SS Exodus, Zionist terrorist bombed the King David Hotel killing 91 people it was at the time the worst terrorist attack not at sea, in the 20th century. It wasn’t surpassed until the OKC bombing in 1995. The King David Hotel wasn’t the last hotel bombing either, The Semiramis Hotel was bombed 2 years later killing a couple dozen people.

Haganah had set up a company called TAS which smuggled  dynamite into Palestine. Many American Jews willingly collaborated with Jewish terrorists to illegally ship arms to terrorist in Palestine.
In August, also in 1946, a Palyam operative with the code name Marshalik bombed the Empire Haywood while it was in Haifa harbor. In 1947 Nissan Livyathan the Palyam commander in France who had also worked with Brichah a unit that smuggled people, chose one Dov Mills to set up a bomb on a ship named Empire Rival. Dov recruited one Gerald Landau as a cohort and they snuk dynamite into the ships kitchen similar to what Mardor had done with his first bomb attempt on the Patria. they then moved it to the ships bilge area.   The plan was to blow it up after it docked in Hamburg. However the British sent bomb squads on to all three ships that arrived and discovered the dynamite before the timer had blown them up. There was about 10 kilo of dynamite.

Of course we all know that after becoming the state of Israel that the terrorist gangs now formed into state institutions did not stop committing terrorist attacks to ships.  Old LBJ the nephew of a ZOA member, was sleeping with an Irgun terrorist the night of the Six Day War. It was in that war that the Israelis attack an American ship the USS Liberty… but that’s a topic for a future film.