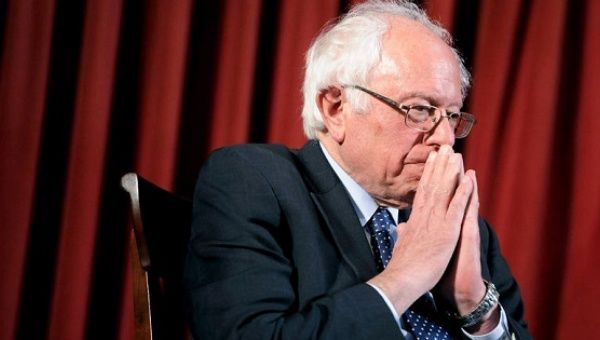 People in the United States have “a lot of right to defend ourselves,” presidential contender Bernie Sanders said at a town hall meeting Monday when asked if he too would have an extrajudicial “kill list” like President Barack Obama. The senator from Vermont also endorsed Obama’s recent deployment of another 250 soldiers to Syria as part of the war against the Islamic State group.

“Look. Terrorism is a very serious issue,” Sanders told MSNBC’s Chris Hayes. “There are people out there who want to kill Americans, who want to attack this country, and I think we have a lot of right to defend ourselves.” However, the senator added, “it has to be done in a constitutional, legal way.”

The New York Times revealed in 2012 that President Obama hosts a meeting every Tuesday at the White House where he decides which suspected terrorists will be added to a so-called “kill list.” Those on the list can then be targeted for killing, typically with an unmanned drone.

“Do you think what’s being done now is constitutional and legal?” Hayes asked Sanders, noting the existence of “a list of people that the U.S. government wants to kill.”

“In general I do, yes,” Sanders replied. Sanders, locked in a tight race with former Secretary of State Hillary Clinton for the Democratic Party’s presidential nomination, was also asked about President Obama’s decision to deploy another 250 U.S. Special Forces to Syria, where they are expected to help largely Kurdish militias fight the Islamic State group. “Here’s the bottom line,” said Sanders. “ISIS has got to be destroyed, and the way that ISIS must be destroyed is not through American troops fighting on the ground.” However, “I think what the president is talking about is having American troops training Muslim troops, helping to supply the military equipment they need, and I do support that effort.”

“We need a broad coalition of Muslim troops on the ground,” Sanders continued. “We have had some success in the last year or so putting ISIS on the defensive, we’ve got to continue that effort.”

Sanders’ comments on the eve of primaries in Pennsylvania, Maryland, Connnecticut and Rhode Island demonstrate that while he may be less inclined to deploy the U.S. military than Clinton, who he has knocked for backing the 2003 invasion of Iraq, he is no dove himself.

In addition to the the use of drones in Pakistan, Yemen and Somalia, and troop deployments in Syria, Sanders also supports extending the presence of roughly 10,000 U.S. troops in Afghanistan and continuing airstrikes in Iraq and Syria that have likely killed more than 1,000 civilians, according to the independent monitoring group Airwars.org.