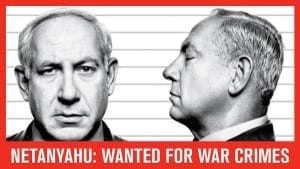 The war criminal Prime Minister of the Apartheid state of Israel that operates in violation of international law, occupying illegally the West Bank and Golan Heights, illegally annexing East Jerusalem, maintaining an illegal siege upon Gaza and continuing to expand upon its illegal racial colonies (Jewish Zionist only settlements) in the West Bank etc. has just announced his visit to Australia come early 2017. Even though Israel has violated more UN resolutions than any other nation/state on the planet, no action is taken against them and for Israels war crimes during the last mass bombardment of the Gaza Strip in 2014 of which Netanyahu stands responsible for, no justice has been served (despite calls for him to be tried for war crimes due to deliberate targeting of the civilian population) . AS AUSTRALIANS UNITED from all different races and religions we must come together in order to take a strong stance against this mass murderering war criminal, we must let it be known that no racist murderer is welcome to enter our country. We stand together as Australians of all backgrounds in solidarity with the Palestinian people and their right to live free from occupation and against apartheid and war criminals such as Netanyahu… The likes of Chris Brown was denied entry to our country, yet a mass murderer is invited… A rapper known as Tyler the creator was banned for having lyrics hostile to women, yet a man responsible for the human rights abuse to women and children and the murder of those people is invited politely…Please share this petition far and wide! Time to show what we are as Australians United!