5 Reasons America Can’t Get Along 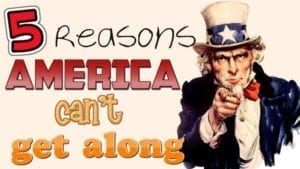 LONDON – America is in turmoil as common ground between the left and right has crumbled, leaving nearly everyone to choose from two staunch sides. Understanding of the psychological underpinnings of either side’s perspective eludes both sides. Regardless of whether this is intentional or subconscious, eventually hands will have to reach across the aisle over some (as of now) unforeseen common ground. Here are 5 barriers to bipartisan coalescence and the top reasons America can’t get along:

Following George W. Bush’s long and terror filled reign the Democrats could have tapped Cap’n Crunch and won the 2008 presidential election. New Yorkers had long since had enough of Homeland Security’s colored alert system and constant needling of and spying on the public. The relief of having replaced GW with his antithesis is something that can still be felt in America to this day.

Following his 2008 election and 2012 re-election, Barrack Obama morphed the left from a downtrodden Bad News Bears into an optimistic Rocky Balboa. From this momentum spawned Black Lives Matter, Occupy Wall Street, and hordes of “social justice warriors” who had just begun to cash their hurt feelings and sense of societal slight into political traction. Their efforts have not gone unfelt by the other side. Many of the core beliefs that the right seems to cling to have been challenged by recent legislation.

Enter: Donald Trump. The right, following the mess that has become post-9/11 military objectives in the Middle East, has been firmly under fire from the left since 2004. Feeling a need to avenge their losses, the left (especially those on the fringe) became belligerent toward the right. Claims of sexism, racism, misogyny, and Islamophobia became common in arguments. Many on the right, even those who lean left socially, have experienced viciousness from the battle-ready liberals whose no-holds-barred fight style has long since worn out its welcome.

Two sides have been galvanized. The liberals on the left seem convinced that Donald Trump is going to swiftly enact strict rulings that repeal much of what they have worked for. In the wake of Hillary Clinton’s defeat many cities have had marches, riots, and beatings. Their 11 year crusade marches forward as they search for new leadership amongst their ranks. The more ardent embody the same spirit they claim to oppose.

Though their party is somehow in shambles, the conservatives on the right have sent their rivals reeling with this latest Presidential election upheaval. Slowly realizing the totality of the left’s tactics and having proven themselves sturdy in the election, the right looks ahead. Their every move will be scrutinized and combed through. Many are using Trump’s victory to flog their election victims.

When you’re at a party and a fight breaks out, someone usually steps in and breaks it up. Once the dust has settled an apology and a request to resume socializing from the host is customary. Without this announcement there is a tacit expectation that violence may pop up again.

America was still in tears when anthrax showed up on Capitol Hill, 7 days after September 11th. Beltway fears swelled to a crescendo again from February to October of 2002 as two men shot 15 people from a rolling sniper’s nest fashioned from a Chevy Caprice. George Bush’s 2003 “Mission Accomplished” speech was as close as America ever came to putting 9/11 behind her.

The Iraq war was followed by an insurgency, guerrilla warfare and further destabilization. The war had not been won and the American public knew it. They told us to shop. They told us to look out for angry Muslims. “If you see something, say something.” When we didn’t find apparent evidence of jihad in our backyards we all started subconsciously and silently looking at and judging one another. Recent attacks in Orlando and San Bernardino further the terror in the hearts of the American public. They are in denial about their collective paranoia and PTSD. Every day feels like it’s still 9/12/2001.

The 2016 election map by county shows a high concentration of leftist voters in city areas. Rural people tend to vote Republican, while urbanites tend to lean left. The legislative needs of city people are not the same as they are for country people. Both groups have become caricatures to one another. To the city slickers, the country folk seem backwards and uneducated. Their post-election tantrums are full of poor sportsmanship and Nazi salutes. To rural America, the urbanites seem like bullies, second wave Apple-using hippies, cheats, babies, and sore losers. They cry foul at Nazism, but somehow gloss over the fascism of anti-Trump gang beatings in the street. The backlash from these actions and perceptions are full of frightening imagery and behavior. Neither side is showing signs of backing down.

Through the fog of a coast-to-coast battle there is some truth to be found in the claims of either side. Yes, the backwoods right has hindered minorities and fomented war. Yes, the progressive left has weaponized their narrative and have become in nature nearly as close in behavior as the right was formerly perceived to be. Both sides need to loosen up and pay more attention to policy than identity. Eventually a summit will have to take place at a strip mall in the suburbs.

The recent change in stance in Rome regarding abortion should provide the city dwelling left with leverage against the Bible-thumping, seemingly backwoods religious right. Attempts to clamp down on alternative media sources by labeling it “fake news” will also sit well in their arsenal. The Republicans will continue to wage their battle online using Wikileaks and the almighty “alt right” as a shield. The barrages of smarmy insults and curmudgeonly behavior will continue until some unifying force intercedes and leads the way for the progressive city mice and the traditionalist country mice to share methods and concerns with one another, instead of focusing on differences.

The greatest tenet of being an American is our right to free speech. Barring slander and threats, we’ve given ourselves room to write. The advent of ubiquitous, worldwide personal internet usage has changed the game. Internet killed the video star. Now anyone can share their concerns and have the chance to interact with viewers they resonate with.

Russia Today, Zero Hedge, John Oliver, and Paul Joseph Watson were all players whose web contributions shaped the tone of the American election. The left may be overreacting in the wake of their loss, but a painful evaluation of all factors that led to this tense point is necessary.

Outside opinions can be good. A fresh pair of eyes can prove useful in any complex situation, but at some point a helpful opinion degenerates into a meddling nuisance. “Loose lips sink ships” was the American order of the day during World War II. The internet’s existence would reek of the potential for espionage back then. There is no one point in particular that foreigners overstepped their bounds during this election, but in retrospect they played too much of a role. Barbarian attacks on an already weak population led to the end of the Roman Empire. While a physical assault is feared by all, the more likely scenario to befall America would be attacks from the outside on their electrical infrastructure and on our population who are vulnerable to misinformation and propaganda.

More dire than the bickering between left and right is the struggle between rich and poor. In the last several decades America has been divided into Haves and Have Nots. Increasingly life becomes easier and better for the Haves, and harder and more miserable for the Have Nots. Most companies hold their bottom line as the highest priority. Legality governs their decisions and not morality. Those benefitting from massive labor forces tend to behave in self-interest, always moving to increase their share of the market.

It is the Have Nots, “those damned blue collared tweakers”, that keep America running. It is also they who bear the brunt of the labor and endless tedium. Many Americans have been turned into neo-plantation owners. Without truckers, teachers, postal employees, and medical professionals America would already have met her doom. Many are disenfranchised with this winner/loser scenario the Haves seem so pleased with, and too many others find repugnant.

Using “greed for its own sake” as a model America has created impoverishment for some 45 million of her people. Millenials have been put under the microscope as a generation of spoiled brats. This is a situation that has been handed down to them by their forebears, the odious Baby Boomers. Outmoded notions like “the customer is always right” fuel a ravenous marketplace rife with demands and pushiness. That puts a hefty day-to-day demand on the folks actually in the trenches. Overseas outsourcing has made the job market barren and has changed the populace from an industrial economy with high output into a service economy with an increasing demand for global resources.

The Haves are going to continue to come under fire from the Have Nots. The Haves’ toys will get nicer and their vacations longer. Most in the Have Not camp will find it best to fire at the ivory tower from behind the lines of the left. After all, it is those dirty Republicans who seem to embody an unsavory fetish for the monopolistic. Watch for the wealthy on both sides to become increasingly cautious and for the lower classes to rightfully demand more. Global strikes are slated to begin in late November.